The tournament field has grown to 12 and the power conferences finally get underway today. More after the bracket. 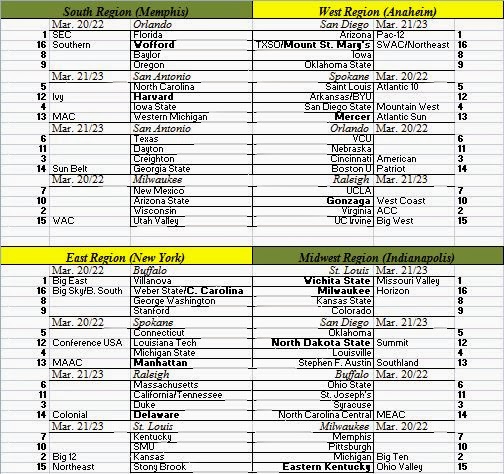 Procedural Bump: Arkansas/BYU down from 11 to 12, California/Tennessee up from 12 to 11


Stop me if you've heard this before: Gonzaga wins the West Coast. I know, shocking, isn't it? That's 12 WCC tournament titles since 1998 for the Bulldogs, who defeated BYU by a score of 74-65. Sam Dower had a double-double with 20 points and 13 rebounds. Mark Few's club, once again, will not have to worry come Selection Sunday. They would've made an interesting bubble team had they lost, but now, we'll never know.

The same cannot be said for the Cougars, however. Despite 24 from Tyler Haws, BYU did not exactly leave a good lasting impression on the committee. Now they must wait a long four days to see if they did enough to be selected to the field. As of today, they are in as one of the last four in. But there is plenty of time for bubble teams from the major conferences to catch and surpass the Cougars.

Also claiming their spots in the field were North Dakota State, the top seed in the Summit, and a pair of upset winners, both winning on the road: Milwaukee winning at Wright State to the Horizon and Mount St. Mary's winning at Robert Morris to claim the Northeast. The Mountaineers will enter the NCAA Tournament at 16-16, meaning they will almost certainly head to Dayton.

In other conference tournament action Tuesday, Grambling and Prairie View won their first round games to advance to the SWAC quarterfinals. The Tigers are ineligible, so they will play for pride against Texas Southern. The Panthers, however, are eligible, and get a shot at No. 1 Southern (who is ineligible).

Howard, Coppin State and Florida A&M advanced to the MEAC quarterfinals; North Texas, Marshall and East Carolina moved on to the second round of the Conference USA tournament.

Today was an easy bracket update. And it was likely the last because the major conferences are finally kicking off today (though the SEC first round isn't exactly thrilling). A few bubble teams are in action, so the bracket will begin to move very fluidly from now until Sunday.

Here is the rundown of games today, starting with the lucky 13th tournament bid up for grabs.

The obvious games to keep an eye on are the Georgetown-DePaul game and all four Pac 12 games. All are looking for wins to either improve their seeding or just improve their tournament hopes.

Enjoy all the games today and get ready for a whole lot more movement in the next few days.